Many people ask me why I chose this motorcycle, and I thought this would be a good time to write about the reasons why I decided to ride KAWASAKI's ZX6R.

Second of all, when I buy a motorcycle, I focus on four points.
1) shape,
2) seat height,
3) weight, and
4) manageability,
because based on my experience, those are most stressful if they do not fit you.

I do not much care about fuel efficiency or kind of function installed on the bike.

Among these candidates, I cut Suzuki's Hayabusa out because my friends always told me that it is a dangerous bike.

I have experience of riding Kawasaki's ZZR 400 which weighs 193kg and having a hard time handling it.

I had no confidence handling the wike which weighs 296kg.

Then, I cut Hond's CBR out because my impression of CBR is too popular and many people ride it.

Also, I have ridden Kawasaki's bike only so that I decided to stick with Kawasaki.

Among them, I cut ZZR1400 out first because I thought it is too big and I don't need 1400cc for just riding it within in small Japan.

Next, I gave up ZZR600. This bike is produced only for export, and I could not find a good conditioned bike in the second-hand markets.

By the time I narrowed the choices down to three, I felt like buying a brand new bike; thus I gave up ZZR1100 also.

So, I compared the seat height and weight of both bikes.

At this point, my feeling tilted toward buying ZX10R because I thought its seat height fits my size.

Next, I compared two bikes by reading review articles and watching review videos.

One article said that ZX-10R does not need to change gear from the first gear if you only run in a town and it shows the best performance on the highways.

Since I do not like to run on the highways when I travel on a bike, I felt ZX-10R might not be for me, but I still could not decide which bike to buy.

At last, I decided to buy ZX-6R by listening to the suggestion of a lady working at the bike shop.

She said "there was a gentleman who bought ZX-10R, and he rode that bike for a half a year, but he came back to the shop saying that I feel like I am driven by this bike and it is boring. He finally sold ZX-10R and bought ZX-6R."

I already told you before that I focus on shape, seat height, weight, and manageability when I buy a motorcycle.

So, I suggest if you are considering buying a motorcycle, compare the wights and seat height by reading specs first, then, if it is possible, test ride the bike but not only riding it at high speed but also ride it at low speed. And, try to push the bike and see how comfortable you are with handling the bike.

The 5 most visited posts in last 7 days: 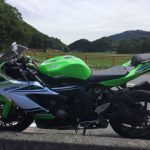